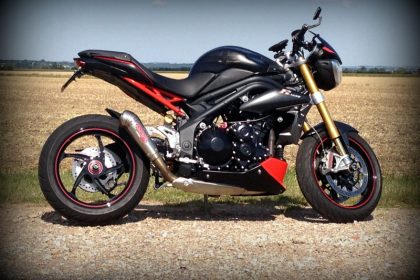 The Speed Triple R has the same 133bhp, 1050cc, inline-three cylinder engine as the standard model, but uses a new-design gearbox, which will feature on the next generation of Triumph’s 1050cc triple engines. 10 of the 12 gears have been redesigned with new shafts, selector drums and selector shafts. There are now five, instead of four dogs on each new gear and the new shape and material offer a claimed increase in strength over the old design. Shaft spines are new and are formed instead of cut, reducing friction. The 6th gear ratio is now 3.4% lower.
The motor has loads of grunt, the power delivery is linear and easy to use and there’s enough oomph to easily see the naughty side of 150mph. On-track, the fuelling mid-corner at low speeds is a little snatchy. 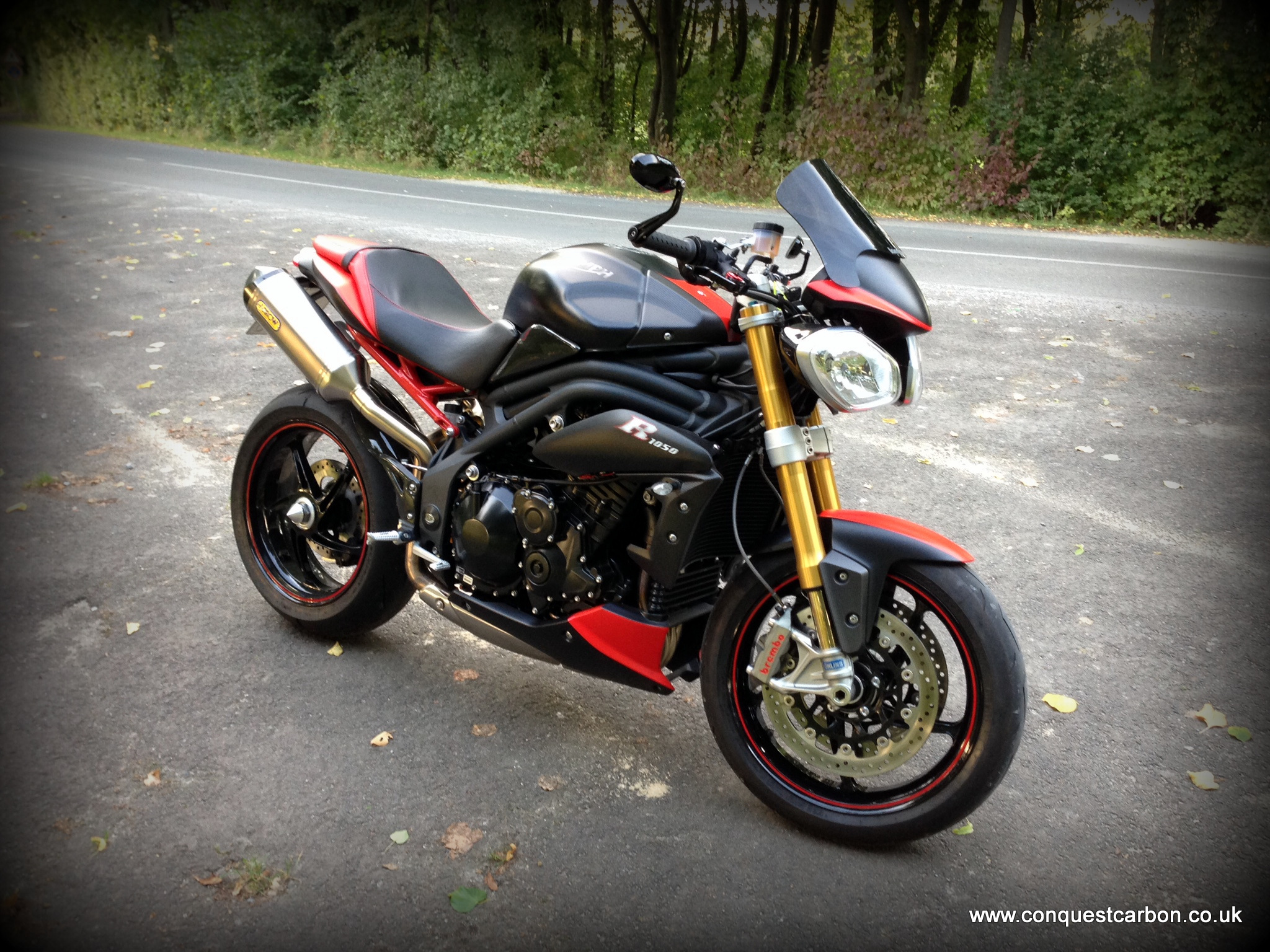 The Speed Triple R has new Ohlins NIX fully-adjustable forks and a TTX rear shock, which gives excellent ride quality and loads of feedback and confidence in the corners. Small changes to the damping settings make a noticeable difference to the ride and handling, which you don’t get on cheaper equipment. New forged aluminium wheels are 20% lighter than cast items, reduce inertia and help the Triumph turn and stop better. New Brembo radial monobloc calipers are race-grade and offer a 5% improvement in braking, according to Triumph.

You don’t get any form electronic of rider aids, but the power delivery and chassis is so good, you don’t need them. Triumph offers a switchable ABS version for an extra £600. This R model also has a one-piece handlebar riser cap, carbon fibre radiator cowls and tank cover infil and mudguard pods, made by same company who produce carbon fibre parts for the Audi R8 and Lamborghini Gallardo Superleggera. It also has a red painted subframe and accents on the wheels, brake calipers and side panels and black-painted handlebars with an ‘R’ graphic.

The quality of the new chassis parts is unquestionable and according to reader-feedback inwww.motorcyclenews.com’s Bike Review section on the standard Speed Triple of this generation, there are no reported reliability or build quality problems.

If you want a bike that can genuinely put a smile on your face, road and track, it’s worth the extra cash over the standard model. With its designer labels, it’s now as sexy as any piece of Italian exotica and all the ‘R’ parts alone would tot-up to nearly double the £2500 premium, if you bought them separately – that’s before fitting and figuring out how to set-up the suspension.

It’s cheaper than the Ducati Streetfighter, MV Agusta Brutale 1090RR and the Aprilia Tuono V4R APRC with all the electronics, but more than the Super Duke R and the non-APRC Tuono.

But, if you’re only going to ride the Speed Triple on the road, it’s probably not worth it, like, if we’re honest with ourselves, most special-edition R and SP model super nakeds and superbikes from any manufacturer. The Triumph looks the part, handles and stops brilliantly and has better ride quality, but you only really get these benefits flat-out on-track. The rest of the time, the standard version is more than good enough.

Based on the Speed Triple launched at the beginning of 2011, this high-spec R version has Ohlins suspension, lightweight wheels, Brembo monobloc brakes, cosmetic changes, a brand new gearbox and a 2kg reduction in weight. It’s added a dynamic new dimension to the hugely popular Speed Triple, turning Triumph’s feisty street-fighter into to a hugely competent trackday tool. 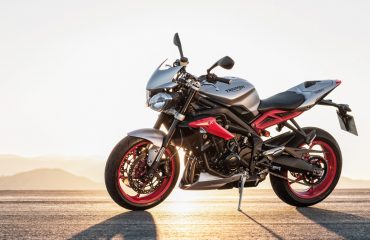