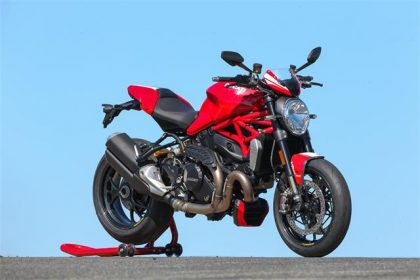 The letter R is sacred to Ducati. Should a Ducati come with an R at the end of its title, you know you’re in for something a bit spesh. Ducati doesn’t just throw the R around like dollar bills on a Saturday night. Panigale R, 1098 R, 996 R, these bikes have earned their place in the pantheon of special Ducatis.
Until now, the R moniker was limited only to track-ready weapons, but the super naked class has dawned full of machines that would wipe the floor with superbikes from not so long ago, and has spurned the Bologna boys into creating this, the Ducati Monster 1200 R – the most powerful nakedbike ever to come from Italy’s Borgo Panigale region.
This is the second new Monster in two years. The original Monster 1200 S missed the mark, judged as being too much road and not enough track against circuit derived bikes like the BMW S 1000 R and Aprilia Tuono – the 1200 R goes some way to rectifying this. Ducati is aiming this machine at the fast canyon, occasional trackday rider, the guy that knows what he’s doing in either circumstances but doesn’t need a Panigale to do it. 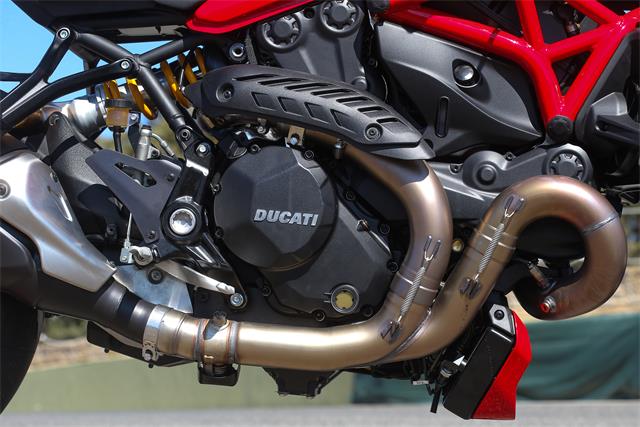 More compression, bigger throttle bodies and a new exhaust have boosted the power to a claimed 160hp.

Compared to the 1200 S, Ducati has upped the 1200 R’s 11° Teststretta’s power 15hp to a claimed 160hp at 9250rpm and increased torque by a claimed 6Nm to 97lb-ft at 7750rpm via new 56mm throttle bodies (up from 53mm), increased compression from 12.5:1 to 13:1 and increased exhaust header diameter a whopping 8mm to 58mm, matching the lot to a revamped but more aesthetically pleasing double barrel muffler. The new exhaust helps bring the 1200 R’s engine in line with Euro 4 emissions requirements, a target every new bike will now be required to meet.
The engine improvements are met with chassis details that have transformed the Monster’s handling from a machine that was out of its depths on the track to one that’ll ham trackdays with the best nakeds out there. Gorgeous black Öhlins forks grace the front – a rarity for any production bike as Öhlins, like we all know, come in gold – matched to an Öhlins rear that has helped raise the bike by 15mm. The new suspension doesn’t give the front any more travel, which is kept at the 1200S’s 130mm, but the rear now gets an extra 7mm of travel to 159mm. There’s also a nice little Öhlins steering damper mounted on the top triple clamp staring you in the face if you happen to like wheelies – which the 1200 R is very, very good at.
Perhaps most telling of all is Ducati’s decision to fit a 200-section rear tire over the 1200 S’s 190 fitted to Marchesini forged aluminum wheels. This little bit of extra tire, combined with more rear wheel travel and ground clearance, means Ducati is claiming 50° lean angle with the Monster 1200 R – who’d have thought only a few years ago we’d even care what lean angle the Monster would get?
Topping the list of changes off are new race-style footpegs (not rearsets, they’re still on a spring), a slightly forward biased riding position and styling updates that include that delectable rear seat unit design that’s now almost devoid of clutter between the number plate and wheel, new side radiator guards embossed with the all important “R” and red stitching down the side of the seat (the passenger’s half of the seat hides under a flimsily-secured cover that doesn’t match the R tag or price of the machine). 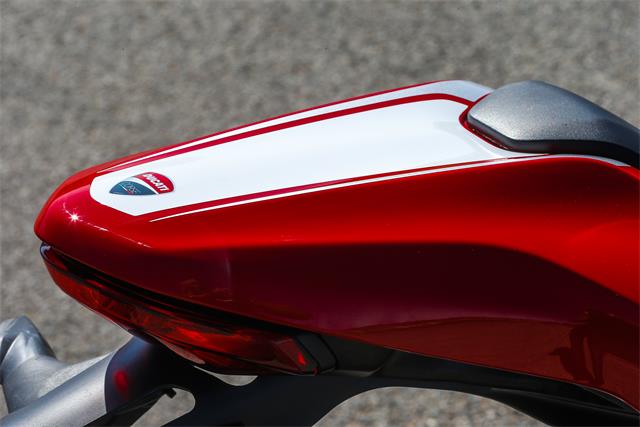 Ducati has worked hard to give the Monster R a racy-looking bum.

The chance to explore these new improvements to the Ducati Monster 1200 R came at God’s Own Racetrack, Ascari, about a two hour drive from Malaga in southern Spain. When I die, provided I’ve been a good boy, this is where I’m headed. This is one of the finest ribbons of racetrack on the face of the planet, a private paradise of speed with every imaginable corner and bend and nip and tuck you’d ever want to ride. Now, I’ll admit here it was a shame not to take the 1200 R on some of nearby Rhonda’s mountainous bends, but that’s they way it is, so we’ll have do with Ascari and a track only comparison. What a shame…
But Ascari is probably the closest track I can think of with corners that we’d experience here in the States – big style canyon sweepers, tight off-camber decreasing radius down hill passes and speed days.
Back when I last tested the 1200 S Monster in Australia last year, I surprised myself by saying this was the first time I’d ridden a bike that I preferred to keep in Touring rather than the full Sport mode. The throttle was too abrupt, too snatchy in Sport, so it was good to see those larger throttle bodies and increased compression has made the Monster much more tractable off the bottom of the throttle. Rather than being met with a punch in the face when you snap the throttle open, now you get smooth, strong drive that’s not only easier to modulate but doesn’t upset the chassis as much on the side of the tire. The 1200 R’s claimed extra 15hp are one thing, but I’ll trade them for a nicer throttle than the 1200 S’s. Happily, you don’t have to. You get both! 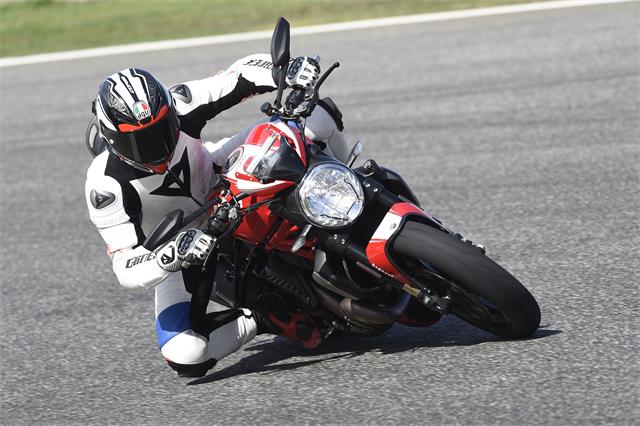 More ground clearance makes track riding much more fun than on a 1200 S.

The slightly increased compression has given the Monster extra hair on its chest through the midrange, with a touch more top-end grunt when you’re really going for it. Snap that throttle open anywhere from 5-8000rpm and you’ll get plenty of DTC (Ducati Traction Control) inducing grunt as you let the electronics take over. Bring on the hate mail if you will, but traction control is now so good you can slam the throttle open at points of the corner that would otherwise send you on a one way ticket to the moon.
But one of the big omissions, especially considering the price of the 1200 R relative to the competition, is the lack of a quickshifter. Considering it’s now at the top of the money pile, I’d have liked the R to come with one as the gearshift is not the smoothest I’ve sampled recently. It’s by no means bad, but its omission from standard equipment is a mark against the bike.
The extra torque means a more flexible desmo, an engine that’s now got hardly any weak spots. Smooth initial throttle, plenty of midrange torque for corner-to-corner zipping and a bit more up top – happy days. But that’s not the most impressive thing about the 1200 R, that honor goes to the chassis. 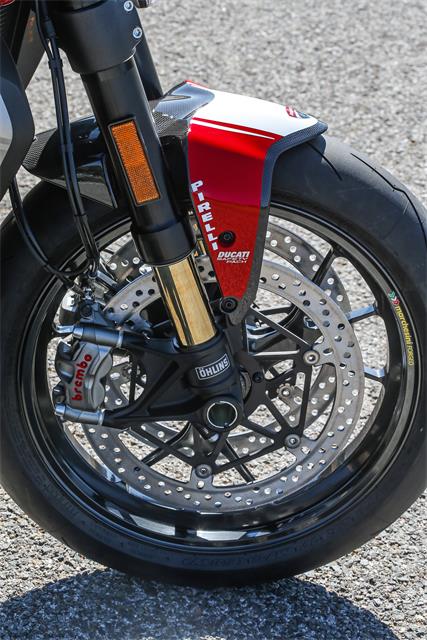 Gorgeous black Öhlins hint at the R being the special one…

The issue with the 1200 S was never the engine. Yes it’s nice to have the aforementioned improvements, but where the S lacked was its sluggish, heavy steering and limited ground clearance that would have you dragging the pegs way too early in a corner. The 1200 R has gone a long way to correcting this and now steers with the precision the S should have had all along. The extra 15mm of height thanks to the revamped front and rear Öhlins means you can be a lot more aggressive on corner entry, throwing the Monster from side to side easily without feeling like you’re riding a grinder. The wider 200-section rear tire gives the 1200 R a sure-footed feel in the middle and exit of the corner – it’s interesting that Ducati has made the 1200 R steer better with a wider rear tire than the 190-section used on 1200 S.
The Monster has always been styled by the shape of the tank. Cast your mind back to any Ducati other than one that starts with the letter M and you will not see another tank like it, so this was something chief designer Gianandrea Fabbro tried very hard to maintain the looks of. The new 1200 R’s tank is a touch more svelte than the S’s but it’s got deeper knee indents to allow a better tuck on the track. This, combined with the slightly more forward-mounted and higher bars gives the 1200 R a bit more of a motard feel, giving you more room to move and making the chassis more maneuverable in corners.
We were spoiled a touch at Ascari as we had Ducati test rider Alessandro Valia set the clickers for us for the morning and afternoon sessions, so the Monster was pretty much as good as it could be with stock suspension, so we’ll have to wait until we get a road test unit to see how it handles on anything other than billiard smooth tarmac with settings picked by the Ducati test rider…
So now we come to the $18K question – is the new Monster now top dog in the super naked category. The answer, simply, is no. Having just completed our super naked shootout a couple of weeks ago, I can safely say it wouldn’t knock the Aprilia off its perch as the reigning king. But that’s not to say it is not a great bike, because the Monster 1200 R is far better than the 1200 S it now stands in front of on the spec sheet (not replaced, you can still buy the S), and it’s not a race derived bike like the top two that finished up in our comparo test. There are parts of the Monster that are disappointing – no quickshifter, that seat cover, and electronics that are annoying to change base settings on, like the KTM) – but these are off-set by the deft touch of the traction control system, the beautiful swooping lines of the tank and those oh-so-sweet black Öhlins forks. And it has become a very handy track machine.
Ducati has done exactly as they planned with the 1200 R – keep the road-based traditions of the 21-year-old Monster lineage but upgrade the bike to such a level that it’s no longer out of its depths on the track. I have no doubt this will make an excellent road weapon (that extra ground clearance especially will work wonders when hitting potholes), and the Monster has something not one of the leading nakedbikes have – that inimitable Ducati style – which on itself will bring buyers to dealer floors.
The price is right up there, but you’re getting a very good bike for the money. 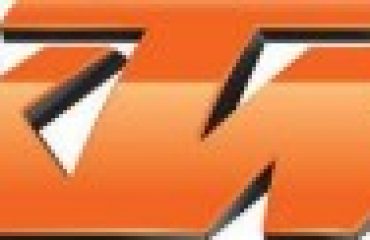