Spanish rookie sensation Marc Marquez outduelled pole sitter Stefan Bradl to win the US Grand Prix for Honda on Sunday and stretch his lead at the top of the MotoGP standings to 16 points.

It was the second consecutive win and third of the season for the 20-year-old, who becomes the youngest rider to win back-to-back races in the premier class. The previous youngest was American ‘Fast’ Freddie Spencer, the 21-year-old winner of the opening two races of the 1983 season.

Bradl, the first German to start a premier class race on pole in the modern era, settled for second and his first podium in MotoGP. Italy’s seven-times world champion Valentino Rossi completed the podium places after holding off Spain’s Alvaro Bautista to take third for Yamaha. “I could see that Marc had a good speed, he was behind me all the time,” said LCR Honda rider Bradl. “But anyway I am very happy with my first podium in MotoGP. “It’s a great result for me and also for the team.

“It was so important because the pressure was high and all the last weekend we were close to it. We knew we had the speed and now we jump on the podium and it’s so nice.” Marquez has 163 points to compatriot and team mate Dani Pedrosa’s 147 in the championship race. “I am very happy not for that moment but for the 25 points because that race was very important for me,” said Marquez.

“At that circuit I expected to be struggling a little bit but in the end we take 25 points. I am so happy.” The Honda rider also becomes the first rookie to win at California’s Laguna Seca circuit with its famed Corkscrew twisting turn. Marquez set up his victory with a daring pass on the Corkscrew, diving under Rossi and briefly leaving the track.

The inspiration for the move came to Marquez from watching video of the 2008 race, when Rossi pulled off a similar pass on Casey Stoner in the same part of the circuit. “I watched a video of him on Casey, I thought that was impossible to repeat but then when I tried to pass him in the braking point, he stayed there and I just released the brakes and I go in the same way that Valentino did in 2008,” explained Marquez.

After missing last weekend’s German Grand Prix with collarbone injuries, world champion Jorge Lorenzo and Pedrosa were both back in action on Sunday. Honda’s Pedrosa took fifth to keep his championship hopes on track while Lorenzo guided his Yamaha to a sixth place finish.

German MotoGP: Lorenzo back on top in FP1, Ducati nightmare 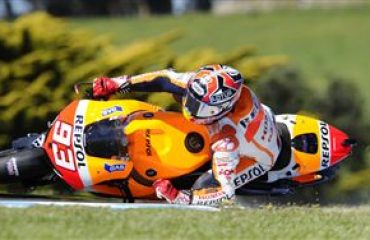