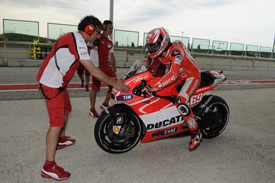 Dovizioso’s distant 10th place in the race was as good as the Assen weekend got for Ducati, as it struggled not only to match its prototype rivals, but to keep up with the leading CRT bikes in the Netherlands.

But the riders were reassured by the frame developments tried in the Misano test from Tuesday to Thursday this week. Test rider Michele Pirro joined Dovizioso and Hayden for the session.

“The Misano track is a bit inconsistent for our bike, but coming from Assen, we immediately felt a bit better at this circuit,” said Dovizioso.

“We worked on the current bike, finding a set-up for the Misano race, and then we went ahead with the development of the laboratory bike, trying some new stuff and finding some interesting things.

“We were able to do nearly two full days of good work, and today we tried a change with the frame. There were some positives, like an improvement with the feeling on corner entry.” 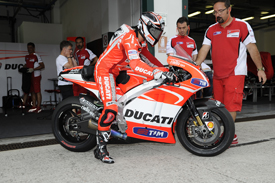 Dovizioso was unsure whether the upgrades could be raced in next weekend’s German GP.

“We must decide what to do; it’s a new part, so we have to understand whether or not we can have it in time for the Sachsenring,” he said.

The satellite Pramac Ducati team was also testing at Misano, with Moto2 rider Alex de Angelis trying the bike ahead of his MotoGP race return in place of Ben Spies at Laguna Seca.

De Angelis was 1.9 seconds slower than team-mate Andrea Iannone as he got up to speed.