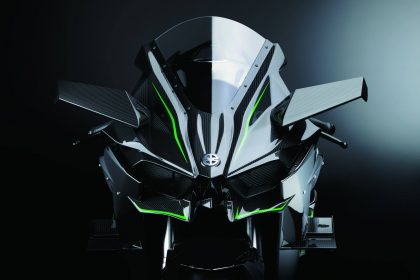 The sharp eyed will already have spotted the lack of headlamps, a numberplate hanger, indicators and mirrors (not to mention the fitment of slick Bridgestone V01 rubber), but don’t despair, the H2R is the track-only version of this incredible new Ninja – there’s a road bike in the wings, too. Called the Ninja H2, it will be unveiled at the Milan show in four week’s time. 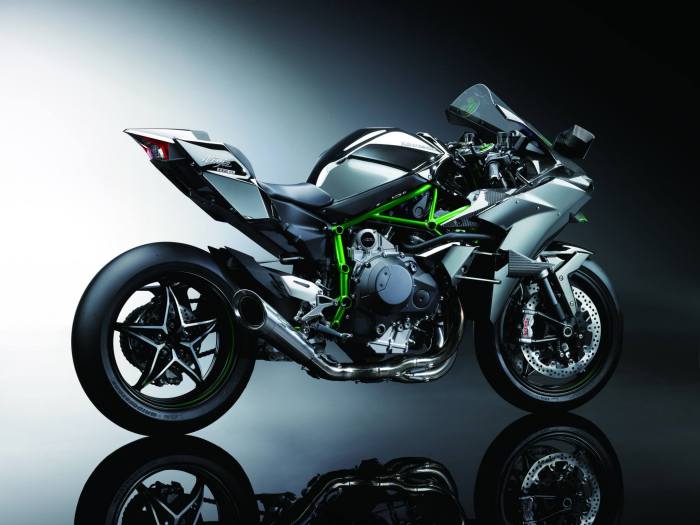 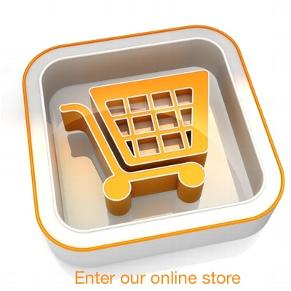 The H2R you see here is the very pinnacle of what Kawasaki can do. The development concept was ‘to offer the kind of acceleration no rider had experienced before’, and with 296bhp available at your right wrist, it’ll certainly deliver that for the first time from a production bike.

While Kawasaki hasn’t given any indication of the bike’s acceleration capability or top speed, we believe this track-only unrestricted version of their new flagship could easily force its way through the air at well over 200mph.

At the heart of this all-new bike is a supercharged 998cc inline-four capable of developing 50% more power than its next nearest superbike competitor, BMW’s new 199bhp S1000RR (see over).

This intense power output could easily upset the dynamic performance of a normal superbike, so Kawasaki have drawn on all their different divisions to ensure that the chassis and aerodynamics are capable of coping with the power output, and resultant high speeds.

Using the Ninja name was an obvious choice, it’s a Kawasaki sportsbike after all, but the decision to use the H2 name shows how much reverence the firm has for its epoch-making 2-stroke Mach IV 750 triple, which was known as the H2.

In its day it delivered acceleration like no other, and with that being the goal for the H2R, it became an obvious choice. It also led to most of the world’s media claiming the new supercharged Ninja had to be a 750, also citing the other H2 – the ZXR750 H2 – but MCN has always maintained the new bike would be a litre class machine.

As well as carrying the Ninja moniker, Kawasaki have also graced the new H2R with their ‘River Mark’, a rarely used piece of branding which dates back to the 1870s, and reserved by the company for products they consider to be of particular historical significance.

Bespoke supercharger
The supercharger has been developed completely in-house with assistance from other the Gas Turbine & Machinery Company, Aerospace Company, and the Corporate Technology Division, all parts of Kawasaki Heavy Industries (KHI).

While the supercharger itself is entirely conventional, optimising it for use on a motorcycle meant that in-house development was essential to achieve the maximum power and acceleration characteristics the engineers wanted to offer.

That trellis frame
While everyone knew the new H2R was going to be supercharged, the trellis frame was far more of a surprise.

Developed using the latest analysis modelling technology, it has been designed to balance the huge power output of the motor, with enough flex to ensure the stability, mechanical grip and feedback needed for high-speed riding.

The primary objective was stability at ultra-high speeds, which usually means a long wheelbase, but Kawasaki didn’t want to sacrifice corning performance, so it had to be compact. The firm then looked to the aerodynamics to boost the H2R’s high-speed stability.

Slippery operator
As speed increases, wind resistance increases exponentially, so Kawasaki needed to make the H2R as slippery as possible, meaning that aerodynamics would play a crucial role in the bike’s top speed and stability.

With all but 300bhp on tap there’s clearly no deficit in the engine output, so the design team enlisted its Aerospace Company to help develop the dramatic sculpted bodywork to let it cut through the air.

The fairing design also maximises cooling performance and heat dissipation, helping the 998cc supercharged engine to operate in its ideal temperature range, while the Ram Air duct is ideally positioned to direct airflow to the supercharger.

Intense-Force Design & Craftsmanship
Kawasaki say that the styling concept for the Ninja H2R was defined by a three-word label: ‘Intense Force Design.’

This is the firm’s halo product, and every element is Kawasaki at its very best, from the engine and aerodynamic development, through to the mirror-finish black chrome paint specially developed for this model

Kawasaki confidently states that it’s the best bike they have ever built. So how much will all this cost you? Kawasaki won’t say yet, but expect this track-only model to be up there with Ducati’s Superleggera, while the road-going H2 is more likely to be around £20,000.

Bodywork
The carbon bodywork was designed with the assistance of the firm’s aerospace division to ensure optimum aerodynamic stability. The black chrome paint was developed specifically for the H2R to help reduce drag.

Supercharger
Designed completely in-house at KHI, this is no parts-bin bolt-on. Conventional litre-class sportsbikes can currently develop up to around 215bhp reliably, the H2R will be topping out at almost 300bhp – while the H2 road version is expected to be around 80bhp less.

Chassis
A trellis frame? On a Japanese superbike? It was certainly a surprise, but it’s the best packaging solution for the engine and chassis components, the ducting needed to the supercharger, and providing the blend of strength and flexibility needed.

Electronics
Kawasaki have given no indication of the electronics package fitted to the H2R, but there is a clearly visible quickshifter fitted to the selector arm, and its size suggests this will be for both upshifts and downshifts.

There is also a KISS sticker on the front fender, suggesting the firm’s in-house traction control system is present, and the steering damper clearly has electronic control. There’s no visual hint of the suspension being semi-active or electronic.

Kawasaki’s all-new supercharged Ninja H2 is now less than 24-hours away from being unveiled at the Intermot show in Cologne, Germany.

With MCN at the forefront of breaking news about the project since patents first started to be filed in 2011, the latest information leaking from Kawasaki suggests this bike is going to be a radical departure from their current range; a high-specification, super performance bike that will sit at the top of the range as a very distinct halo offering, likely to cost in excess of £20,000.

Way back in 2011 MCN revealed that Kawasaki had filed a host of new patents, all relating to a new supercharged motorcycle. From the outset it was clear that this was to be a high-performance, four-cylinder machine with a single supercharger mounted directly behind the engine.

Despite the lack of official information about the bike, one key statement to its intentions is hidden in the source data of the www.ninja-h2.com teaser website set up to plug the bike before its September 30 launch.

Titled ‘description’ it says: “The Ninja H2 was not designed with meeting regulations as a primary concern. Kawasaki’s latest flagship is the result of a pure exercise in pushing the limits of motorcycle technology with the goal of creating the ideal road sportsbike.”

The reference to regulations is clearly talking about racing rules rather than road-going regulations, which the bike will still have to meet if it’s to be the ‘ideal road sportsbike’.

Kawasaki’s decision to make the H2 a pure road bike promises to be the key to its abilities. Our information suggests that the engine will, as shown in some of the patents, be derived from the ZX-10R, keeping that bike’s 998cc capacity.

A sound clip of the bike revving through the gears on Kawasaki’s teaser website initially appears to be higher-pitched than you might expect, but an acoustic analysis of the noise shows that it’s revving to around 12,000rpm – which is what you’d expect from a 1000cc motor.

What about the rest of the bike? Although the most recent patents, surprisingly, show a tubular chassis design, we’re expecting the final version to be similar to the ZX-10R’s beam frame. But this is a high-end bike so we also expect top-quality suspension and electronics.

More than one of the patent images filed by Kawasaki has shown the bike with a single-sided swingarm – not something the firm is known for, but a styling element that’s become synonymous with high-end machines ever since it was adopted by the Honda NR750 and NC30, as well as decades of Ducatis.

This is unlikely to be a flash-in-the-pan for Kawasaki. At the same time as it filed applications for the trademark ‘Ninja H2’ it also filed ‘Ninja R2’ – presumably a derivative of the same bike, and possibly a more affordable mass-market follow-up?

The firm has also registered the name Ninja H2R, suggesting that tomorrow’s release could be a full-on track-only special edition of the H2, likely to benefit from extremely high-end components and materials, and able to fully exploit the new supercharger’s upper limits, meaning a output likely to be approaching 300bhp.

Get used to it
Official power figures have yet to be released, but we wouldn’t expect less than 250bhp – meaning the H2’s tailpiece, disappearing off into the distance, will be a familiar sight for most of us!

Sound’s strange
The engine note you can hear on the H2 teaser website has been acoustically analysed as revving at 12,000rpm, consistent with a 998cc engine. The unconventional sound will be down to the supercharger and the lack of traditional airbox.

Top spec components
Sitting as Kawasaki’s flagship sportsbike, the H2 will no doubt be dripping with high-spec suspension and chassis components, making it worthy of its £20,000 plus price tag.

Familiar face
The H2’s ‘face’ is likely to be dictated by Kawasaki’s decision on the air intake design. Recent patents show a set-up with a single intake on the left side but there are also patents that show symmetrical intakes, too.

How a supercharger works
Any petrol engine’s power is basically governed by how much fuel it can burn. And to burn fuel, it needs air to mix it with. There are three basic ways to get more air into an engine: increase its capacity, increase revs, or compress the air before putting it into the cylinder – and that’s where superchargers and turbos come in.

There are several types of supercharger, but all the Kawasaki designs we’ve seen so far have used centrifugal superchargers. They use a finned disc called an impeller, which is spun at around 100,000rpm to suck the air in through a central hole in the compressor housing, which is the part shaped like a snail’s shell.

It’s basically the same as the compressor side of a turbocharger, but instead of the impeller being driven by exhaust gas, a supercharger’s is driven from the engine’s crankshaft, via gearing to massively increase its speed.

Because compressing air makes its temperature rise, most modern supercharged engines also have intercoolers to bring its temperature back down. Intake air that’s too hot is inefficient and potentially dangerous to the engine.

Kawasaki’s designs so far have shown an air-to-water intercooler, where the intake heat is removed by passing it over water-filled tubes, with that water pumped around its own cooling system to an extra radiator to cool it down again. 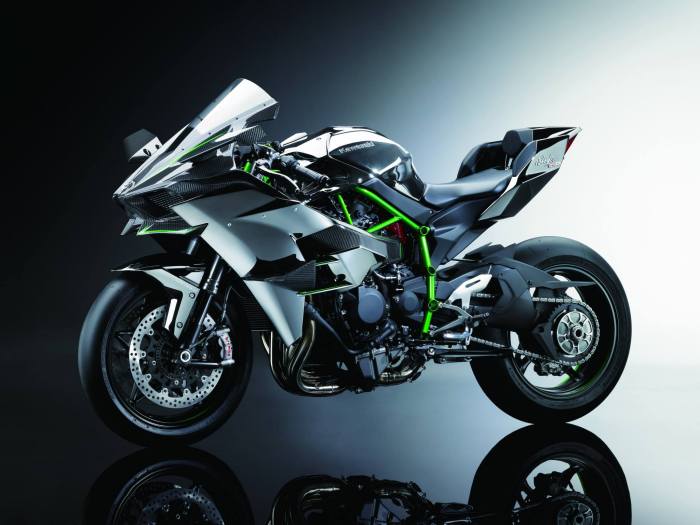 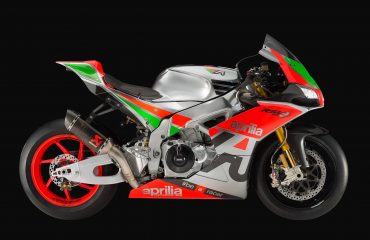