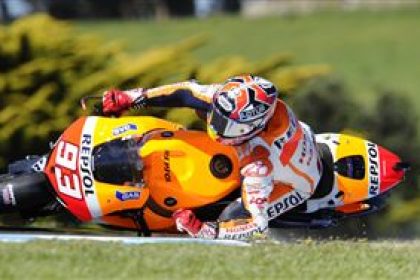 Marc Marquez unhurt in practice crash, Marc Marquez suffered a scare on the opening day of practice for the Phillip Island MotoGP clash in Australia earlier today when he walked away unhurt from a tumble at the famous Lukey Heights section.

The Spaniard, who could clinch an historic first premier class world title on Sunday, fell on only his third lap in this afternoon’s FP2, but was fortunate to escape any injury.

Marquez was second fastest behind title rival Jorge Lorenzo this morning but lost the rear of his factory RC213V machine at Lukey Heights, which is taken in third gear at close to 95mph.

Marquez, who will be crowned world champion if he scores eight points more than Lorenzo in Sunday’s 27-lap race, said: “I opened the gas in the same place but when I tried to open a little bit more the rear slid out so aggressive, which normally doesn’t happen. But maybe I opened the throttle a little too much and now I know I cannot open more gas in that corner.”

Marquez might have escaped injury but the spill forced him to complete the session on his second RC213V and an experimental geometry setting meant he was only sixth quickest at the end of FP2 and over a second behind Lorenzo.

His best morning pace of 1.29.255 though still put him second on the combined timesheets and he added: “I was happy this morning but in the afternoon I crashed the number one bike and then bike two we tried a big change in the geometry to see what difference it would make.

“But I didn’t like the second bike and then there was no time to change the set-up. For tomorrow we know the way. I just need a little more stability in the front on corner exit.”