The meticulous observation of the modern motorcycle braking system’s has given birth to our “Ducati Brembo Race Brake Caliper Intake Coolers”. We have studied the thermal energy transformation during brake action and with the heat radiation spreading throughout the calipers and its close components. It has been observed that, for various reasons, braking systems have lost performance during the last few years as modern bikes speed performance upgrades & the arrival of synthetic materials have greatly improved. Here lies our ambition of inventing a double function device that reduces the heat radiation coming from the pads towards clamp and oil & at the same time generate cooling of the brake pads in order to avoid sustained critical temperatures. Thus providing the rider better braking performance throughout their ride.

The project has been developed for over a year and during this time we have used different motorcycles, and always getting the same result.

Our caliper brake intake coolers have been designed using two different metal elements to optimise the cooling of the brake pads & the caliper.

The main body of our intake coolers is made of a special thermal steel with a high degree of heat conductivity. The material is first laser cut and then CNC machined in our workshops, the slots have two purposes, the first is to reduce the contact surface, the second to release the hot air formed inside the brake piston cavity by reducing the hot chamber effect, and the propagation of heat in the piston and oil. The main body of the steel sink is connected to a light alloy heatsink made of a special aluminium with high thermal conductivity, which has the task of assisting the process of heat dissipation.

Our tests have shown a reduction in the temperature of the brake pad to a maximum of 20 degrees, and a substantial improvement in braking and an increased stability in corner braking. In addition, the brake pads have shown to have a longer life of 25%. 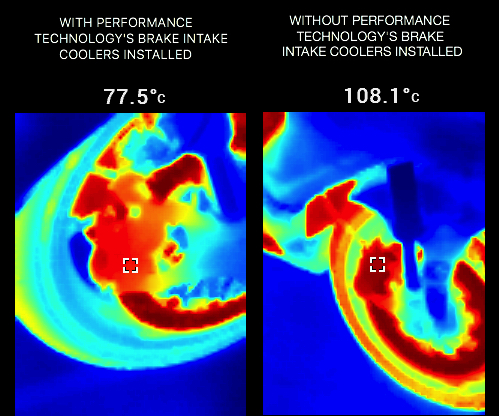 The development of the project lasted one year, we started with the choice of materials and their production process. Various configurations and different materials have been tried, we have used data acquisition tools and special heat cameras for the view of heat propagation by examining different points of the brake caliper and brake pad. We spent over 500 hours on the circuit and 20,000 km of road test.

In total, the product has been tested on six different motorcycles and under different conditions of use. So we have come to these configurations that in our opinion guarantee the exact compromise between efficiency, weight, cost, and ease of installation.