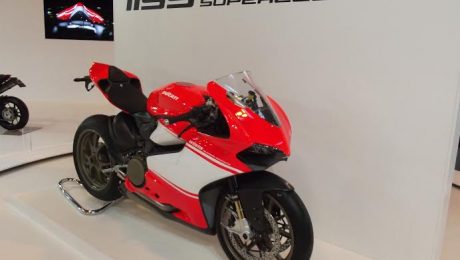 The penultimate week of November saw Motorcycle Live return home to the Birmingham’s NEC, filling three of the biggest halls with all that’s great within motorcycling. All the major manufactures were there, with the notable exception of MV Augusta, who were present at last year’s show. This was a little strange as MV have several new models out for 2014 including the Turismo Veloce Lusso 800, a tall-rounder aiming to take sales away from the Ducati Multi Strada and Aprilia Caponord; and their new hyper naked set to do battle with the new Monster 1200, KTM Duke 1290; the Rivale 800.

Like last year, along with all the static displays, there was lots to see and do including the live Crank’d stunt show, electric kids bikes supplied by Kuberg, the Yamaha off-road experience and not forgetting the ACU Try Trails area and the Test Ride Zone. The Behind the Bars movie was shown at regular points throughout the day and the very popular Get On Zone which is aimed at getting more people interested in riding returned for another year.

Instead of queuing with the masses, this year I was able to utilise the press area and was able to sit down, relax and plan my day. I was trying not to get distracted by the star riders who started filtering past, but it’s still funny to see John McGuiness pulling his stuff along, or Sam Lowes the new BSB champion casually drinking his Starbucks. Just before the doors opened at 10:00, I sneaked through the press door and got my first look of the show. Some exhibitors were putting the final touches to their stands, making sure everything was neat at tidy. A few were giving some team talks and Kawasaki were having photos taken of their team. It was the going to be a busy day and the start of a busy week.

Thankfully, Ducati had a much bigger stand than last year. The number of bikes on display was about the same and in typical Ducati style, their flagship Sportsbike was taking centre stage. Two £60,000 invite only 1199 Sugerleggeras were sat on a revolving platform that displayed the bike in street trim and naked form. It really is a beautiful bike and the fact it puts the already stunning 1199R to shame, goes someway to explain its astronomical price tag.  Making its UK debut was the new 1200 Monster with style cues that hark back to previous versions, the bike is clearly part of Monster family and comes fitted with an exciting exhaust system that snakes its way around the front of the bike. Possibly the most anticipated bike on the Ducati stand thou was the 899. Filling the successful shoes vacated by the 848, the 899 had already received its UK premier at the final BSB round at Brands Hatch and is already available through their dealers. Other bikes on display included the Hypermotard, Hyper Strada, Diavel Strada, 696 Monster, the 1199 Panigale R and a new stealth black version of the 1199S.

The Kawasaki stand was heaving, so they must be doing something right. With the usual display of race bikes, including Chris Walkers new 2014 GB Moto machine, this year the Kawasaki full range included the new Z1000, which although is possibly the ugliest bike of 2014, is by all accounts really rather good. There really is something about Kawasaki Orange thou which I can’t quite put my finger on. The updated Z800 was getting lots of attention and so were Kawasaki’s new range of Scooters and the retro W800. Although practically unchanged, the ZZR 1400 was getting its fair share of admirers as well, but then that’s to be expected given its performance qualifications.

Honda remain the world largest bike manufacturer and judging the amount of space they were using, it really shows. Bringing back the Honda My first licence for children and an impressive café area, Honda filled their stage with an impressive range that included their updated Fireblade, the CBR600RR and they also had a comprehensive number of smaller bikes and scooters that included the Integra and the updated CBR300R. The new bikes didn’t stop there with Honda unveiling the CB650F, the Goldwing based CTX1300 and for me, the most important bike at the show, the new VFR800F.

BMW arrived at the NEC celebrating their 90th anniversary. Part of their space was taken up solely with models from their past, which included classics, Dakar bikes and even a K1. The pride in the race success of the S1000RR was also clear to see, with a collection of this year’s race bikes.

BMW also had one of the most hotly anticipated bikes on their stand and that was the S1000R, the naked version of their Superbike. It was getting a lot of attention, but people seem to forget that BMW already have a ballistic naked bike in their range, the K1300R, which I’m still very much a firm favourite of. With a couple of revised bikes like the new GS being classed as new for 2014, apart from the S1000R the only other new bike was the Nine T. The idea with this bike is that the owner is able to have the bike they want with a variety of bolt ons to suit its requirements.  As a result in basic form, it’s a fraction underwhelming, but when you look closer at the bike and notice a BMW logo smack bang in the middle of the headlights, you know a lot of thought has gone into the bike.

Best of the rest

Say one thing about the big HD, they know how to put on a show. Celebrating 110 years HD displayed a small range of bikes charting their history. Although not a cruiser rider, some of these bikes were amazing. I may struggle to ride one, but I certainly wouldn’t mind having one in the house just to look at.

All the attention at the Yamaha stand was directed towards the XV950R, their take on the custom cruiser and the all new MT-09 and 07s. Despite not changing either the R6 or the R1, people was still queuing to get on board and squeeze the levers and the Yamaha stand was filled out with their range of scooters and other bikes including the V Max.

Where to start with Suzuki? Well, as far as I could tell the only new bike for 2014 was the V Strom 1000, which is a brand new model that is re-launching an old name. Their stand will filled with several bikes that are continually being revised such as the Hayabusa, the SV650 (you remember this, used to be called the Gladius), the Inazuma 250, the Intruder cruiser, which has the worse name of any bike on the market as well as the now obligatory collection of scooters.  Their hospitality area did have some really nice race bikes on display but I left their stage feeling like I had already seen this range of bikes three years ago, which is sad, because they do make some great bikes. The only area of note was an area dedicated to their GP motorcycles which included the new MotoGP machine and a Kevin Schwantz racer.

KTM were again at the show. This year they brought the balls out crazy Duke 1290; a bike so mad that the prototype was named The Beast. The newish KTM Adventure was very popular with riders looking for a viable alternative to the GS, but for me, the most exciting bikes on their stage were the new RC125, 200 and 390s with sit in their Sportsbike family underneath the RC8R. Despite being clearly great bikes that look like a lot of fun and that I actually really liked them, I have to question the reasoning behind these. I can understand the 125 which will go head to head with the likes of the Yamaha R125 and the Honda CBR125R and will make a great first bike, but why produce two bikes in the 200 and the 390 to go head to head with the new Honda CBR300R and Kawasaki’s Ninja 300. The rest of the stand as expected, paid homage to their off road machinery.

Other bikes on show were supplied by the likes of CCM, Royal Enfield, Husqvarna, Norton, WK, Lifan, Aprilia, Triumph, Gas Gas, AJP, Victory and most importantly Motorcycle Live announced the return of Indian. The Indian stand was absolutely buzzing with interest and with only a very limited range of bikes available, they are taking HD on at their own game and have produced some absolutely stunning bikes. Even as a devout Sportsbike rider, I could picture myself riding one across American. That is the power of a well designed motorbike.